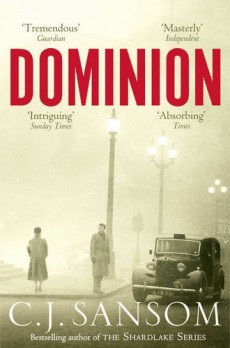 Churchill has lost his bid to lead the wartime government and Britain surrenders. Resistance to the German masters slowly builds.

This is not the exquisitely-crafted Tudor murder mystery we have come to expect from C J Sansom. This is his alternative version of what might have happened had Winston Churchill not gained power from the inadequate Chamberlain at a crucial moment in world history and this thought-provoking book requires the reader to accept that gloomy basic concept.

Sansom’s ideas about how history might have changed won’t be to everyone’s taste. Part of the contention is caused by his use of real figures – and individuals will have differing views on how those people might have behaved. This ‘what might have been’ story is set in 1952, 12 years after the appeasers under Lord Halifax agreed a treaty with Germany. Britain has become an authoritarian state, increasingly collaborating with the Nazis, with a handful of shadowy German SS ‘advisers’ its de facto government and with army units in occupation.

Opportunist newspaper magnate Lord Beaverbrook and his fascist Home Secretary Oswald Moseley run this puppet state, the media is strictly controlled and the streets are patrolled by violent auxiliary police. British Jews face the possibility they will soon be sent to the ‘camps’ to share the fate of millions of their continental brethren.

British resistance, under Churchill and the Labour leaders Clem Atlee and Nye Bevan, is growing. A small, but determined, underground organisation foments direct action, strikes and civil protest. Half-Jewish civil servant David Fitzgerald has dabbled on the edges of this movement until he is given the task of rescuing a college friend, scientist Frank Muncaster, held in a mental hospital, who may hold a secret that could change the course of both the war and the world. With the help of a widely disparate group and his unwilling wife Sarah, he is drawn into a spiral of deception and death as they try to stay ahead of an efficient, intuitive and determined Gestapo officer.

Sansom’s Winter In Madrid, set during the Spanish Civil War, highlighted the clash between compassion and conviction and once again he returns to his underlying theme of the abuse of power and the dangers of nationalism. In his historical note the half-Scottish author explains his fears that the growing power of nationalistic, anti-immigrant and often openly fascistic power blocs across Europe – the SNP comes in for some particularly scathing analysis – could plunge us all back into the dark ages.

This compelling and truly convincing amalgam of the 1950s as they were and as they might have been, bolstered by a wealth of background detail, cannot disguise the tale of a man’s growth into moral courage told with a real sophistication, compassion and excitement. The relationship between Fitzgerald and the frail Muncaster is at the heart of this gripping and humane thriller with a poignant love story woven into the overall thread. The lesser characters are just as brilliantly and carefully portrayed and equally as believable.

Dominion is a provocative read, steeped in gloom and desperation just like the Great Smog of 1952 that blankets the plot. The characters are flawed and real, fanatics, opportunists and pacifists alike, who wax and wane with events. It all adds up to a horrifyingly desperate world that you leave with relief that it is only what might have been.