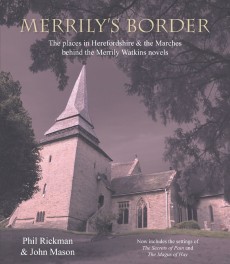 A travelogue with a difference as the author of the Merrily Watkins series teams up with a photographer to explore the settings for the books in Herefordshire and the Marches.

Phil Rickman tells a damn good yarn. But then you’ll know that if you’re a fan of his Merrily Watkins series, set in that strange part of the UK where England and Wales morph into one.

The series features a female vicar who is also a deliverance consultant (or exorcist in old money). Merrily and the supporting cast of Gomer, Jane and Lol are all terrific, but it’s fair to say that a good chunk of the appeal of the series is how Rickman uses the Herefordshire and Marches landscape.

Rickman’s a contender for the king of woo woo but, like John Connolly, has always stayed on the right side of the divide. It doesn’t mean that you won’t want to read the books with the lights on, though, as he uses his past as a horror writer to very good effect.

He’s an engaging tour guide in Merrily’s Border, which is a travelogue with a difference. There’s a strong whiff of the bloke you meet in the pub who spins you tall tales, but hey, he’s a good talker and I have a pinch of salt or two ready where needed!

The book is boosted by John Mason’s melancholy photos – both colour, and black and white. I’m old enough and grumpy enough to reckon that the latter often tell a much better story that vivid technicolour. And they suit Rickman and his spooky settings down to the ground, even if technically some of them aren’t top-notch. Shots of the Templar church at Garway, Hay-on-Wye (bits of the Magus of Hay had me reading in daylight!), Ludlow, Hereford and the distinctive black and white architecture of the area, as epitomised in Merrily’s fictional town of Ledwardine, all brood beautifully.

Landscapes, buildings, famous people and the legends that so fascinate Rickman are all there. The ghosts of Edward Elgar, Alfred Watkins, Nick Drake and Rickman’s picaresque cast sprawl across the glossy pages. If you’re a fan of the series, the book is indispensible and will make you want to re-read from the start. If you’re a newcomer, the book will entice you into this beautiful but forbidding area and set you up with a series that has improved as it ages.