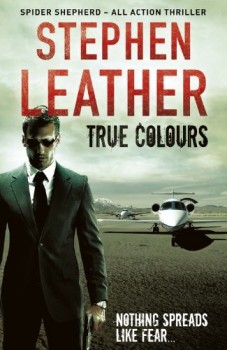 Spider Shepherd is undercover again, this time as a close personal protection advisor to a Russian oligarch whose friends who are being targeted by a sniper. It’s Spider’s job to advice on security, but he’s also considering some extra-curricular activity of a type his employers would very much frown on.

Dan ‘Spider’ Shepherd is still working for Charlotte Button at M15, and this time she wants him to go undercover in the entourage of Peter Grechko, an almost unimaginably wealthy Russian oligarch. Grechko has just been the target of an unsuccessful assassination that injured one of his bodyguards, and as he’s a man who has the ear of the Prime Minister, the Home Office want to make sure that nothing happens to him while he’s on UK soil. He’s also not the only Russian billionaire being targeted, so the threat is definitely one to be taken seriously. Shepherd doesn’t like the man, but that’s not a problem, he’s just there to make sure there are no holes in Grechko’s security and that the man stays alive.

But on this occasion, Shepherd isn’t wholly immersed in his role as a firearms officer specialising in close personal protection, or bodyguarding, as most people know it. An old friend from his days in the army wants his help. In Afghanistan in 2002, Shepherd was shot and nearly killed after just watching his young captain die in his arms, the victim of a Taliban sniper. According to Lex Harper, the man – Ahmad Khan – is now living in London, with a UK passport and driving licence and Harper wants to even the score. As well as killing their captain and wounding Shepherd, Khan was also responsible for the deaths of three young soldier, all shot in the back. Harper wants Shepherd’s help in finding the man. The only question is how far is Shepherd prepared to go in the quest for revenge.

True Colours isn’t the most fast-moving of Stephen Leather’s Spider Shepherd series. Much of the book is taken up with descriptions of Shepherd’s attempts to tighten security around Grechko, interspersed with flashbacks to Afghanistan, and Shepherd’s meeting with the paranoid Harper, a man who thinks – probably correctly – that everyone is out to get him. But as Harper is very definitely operating on the wrong side of the tracks, his elaborate attempts to fly under the radar are probably justified.

The book flows along at a reasonable pace, despite the lack of action and when the inevitable violence ensues, it is over almost as soon as it begins. In True Colours it becomes clear exactly how far Shepherd will step across the line in furtherance of revenge and in fact he doesn’t so much cross it as gallop past it at speed once his mind is made up. Some action around the mid-point of the book wouldn’t have gone amiss, but I didn’t particularly miss it, and taken as a whole, this is a reasonable addition to the series, showing Shepherd in a slightly different light – one that may very well come back to haunt him in the future.