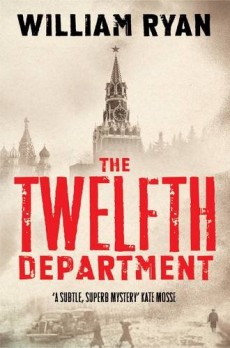 In 1937 Moscow policeman Captain Korolev is assigned to the murders of two important scientists, but secret police interest complicates his task.

Against the background of the great terror in 1937 Moscow, police captain Korolev is enjoying a visit from his son Yuri. His leave is quickly curtailed, however, when an eminent scientist is shot and he is directed to investigate. The following day, the dead man’s subordinate is savagely stabbed and Korolev is told to add that to his caseload.

In view of the importance of the two dead men, Korolev is temporarily attached to Rodinov’s department of the NKVD (the secret police), but finds that another department, under Zaitsev, has a strong interest and is manipulating evidence wholesale to ensure no criticism attaches to the victims’ place of work.

To make things worse, Yuri goes missing and Zaitsev makes it clear that he is hostage to Korolev achieving a ‘satisfactory’ outcome. Korolev needs to steer a careful path between the competing factions to protect himself and his family.

This is the third outing for Alexei Korolev. As usual, the difficulties of his work are compounded by the interest of powerful characters in the organs of the state, and a successful resolution to a case is not so much about the truth as conciliating persons of influence. With two NKVD branches having different priorities, The Twelfth Department presents the protagonist with such problems in a particularly acute form, and this makes for an exciting read.

Korolev is an efficient detective and it is not long before one or two key details come to his attention: these are trailed in such a way that the reader comes to the solution at much the same time as Korolev, much the most desirable arrangement for detective puzzles. Of course, Korolev still has the problem of how to extricate himself and his son. Luckily he is able to enlist the assistance of his police junior Slivka and her uncle Count Kolya, a Moscow crime boss, to effect a rather unorthodox rescue. These and other secondary characters add depth to the story, and should the list of Russian names prove too much for the reader, a list is given at the start of the book for easy reference.

The unique background to Ryan’s Korolev series, set at the height of Stalin’s terror, gives a special spin to the typical detective story, and those who like the Russian-located thrillers of writers such as Robert Harris and Martin Cruz Smith may find them particularly appealing. Those who are already fans will find The Twelfth Department at least as thrilling as its predecessors.