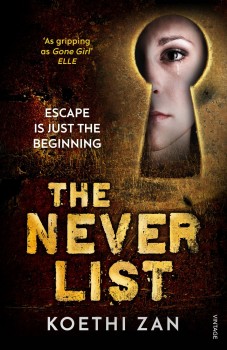 Sarah and her friend had compiled a list of rules which, in order to guarantee their safety, had to be observed. One night they broke the rules and had to face the consequences.

The Never List immediately takes its audience into the middle of the action as it is made clear that there had been four girls held prisoner in the cellar and that suddenly one day there were only three. The missing one, Jennifer, had been best friends with the narrator, Sarah, who had never been able to forget her. That Sarah and Jennifer should ever have been taken and held in this way was in itself almost unbelievable because, following a near-fatal car accident in which they had been involved, they had gone to great lengths to make themselves as safe in the world as it was possible to be.

They had a list of dos and don’ts to cover almost any situation and, being mathematically inclined, could employ statistics to analyse risk. But, however careful they were, there was always the possibility of a mistake and it only took one mistake for them to end up chained in a dark cellar.

The story of what happened to Sarah and her companions gradually unfolds in flashbacks. When she and Jennifer were abducted they found that there were already two girls, Christine and Tracy in the cellar. Three of them were kept chained to the wall, naked, half-starved and tortured whenever their captor felt like it. Jennifer is kept in a box, apart from the others, until she disappears and Sarah is told that she is dead.

The remaining three are kept in captivity until they manage to escape. The three girls are affected differently by their captivity. Tracy – by far the toughest – seems almost to take it in her stride. Christine, who comes from a privileged background, can’t bear to be reminded of those days and has married a wealthy investment banker who is unaware even that she had been kidnapped. Sarah, however, is completely traumatised by the ordeal and shuts herself away in her apartment, giving the janitor strict instructions that he is not to allow anyone to see her.

One day, however, she does deign to speak to a visitor – FBI Agent McCordy, who had assisted in their escape. He informs her that their abductor, Jack Derber, is due to attend a parole interview and that, owing to his exemplary conduct in prison – he claims to have had a religious conversion – there is every chance that he will be released. He asks Sarah to attend the hearing as a witness against him.

This is not something Sarah is prepared to do and it transpires that the other two girls are equally unwilling. She is appalled, however, by the possibility of Derber’s release and decides that, having always tried to put him from her mind, she will now look to find evidence that will work against him. This entails having to leave her apartment, of course, but that seems less of a risk than having Derber come to look her up on his release. She also feels a responsibility to find out precisely what happened to Jennifer. She begins by trying to find Derber’s ex-wife, Sylvia, which aunches her into a non-stop search for evidence against him.

The Never List begins quite slowly, perhaps inevitably since it has to set the scene by describing events that had already occurred. However, once Sarah and Tracy begin their search, the pace quickens. The girls move from one dangerous situation to another and the ending is charged with suspense. Various suspicious characters are encountered – the leader of a religious sect, two academic colleagues of former university professor Derber who seem to be hiding something, and an uncommunicative woman who acts as a church caretaker. The plot is not only exciting but also very neatly constructed. Each incident seems to follow naturally from the previous one, with perhaps one exception, and each character has something to contribute.

Sarah herself is the main character and the tension increases as she launches herself back into a world she continues to regard as dangerous. Although the reasons for her paranoia seem apparent, there is hope that this new purpose will be the first step in her regaining the capacity to live a normal life. However, before that can happen, Koethi Zan has more surprises in store when more is leaned about events in the cellar.

This is an intelligent thriller, written with considerable restraint. It would have been all too easy to describe in detail the horrors the girls suffered in Derber’s cellar. Zan avoids this and manages, by hint and suggestion, to convey the nightmare of their experience.