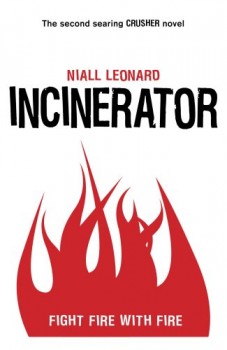 Finn Maguire owns and runs his own gym. He’s finding his feet after the murder of his stepfather and is doing pretty well, but his partner, Delroy, is being targeted by loan sharks and it’s not in Finn’s nature to stay out of trouble for very long.

Bad things happen to Finn Maguire. He’s only 17, his stepfather and mother have been murdered and he’s already racked up an impressive body count around him in screenwriter Niall Leonard’s debut, Crusher. Now, with the help of a large inheritance from a friend of his dead stepfather, Finn owns and runs a gym in a rough area of London.

He knows how to look after himself, and he’s loyal to his friends, so when his partner, Delroy, is threatened by loan sharks, Finn is determined to get involved. But things then go from bad to worse when his lawyer absconds with Finn’s money and he’s left trying to pay off Delroy’s debts as well as his own.

Finn doesn’t believe that Nicky, his solicitor, went off of her own accord, despite the fact that she was apparently caught on camera at an airport leaving the country. He starts to do some digging into her disappearance and, as usual, he pisses quite a few people off pretty quickly.

Anyone who thinks young adult fiction is all about wizards and teenage romance will get a bit of a reality check if they venture into the brutal world that Finn inhabits. There’s enough sex and violence in Incinerator to give any adult crime thriller a run for its money, with dodgy coppers blackmailing blow-jobs out of people, gangsters getting eviscerated, and murder, arson and mayhem at every turn.

Finn, a dyslexic drop-out with a drugs conviction, left school without ever really having learned to read, but he’s smart, streetwise and as hard as nails. Unfortunately for him, he’s not always the best judge of character and has a tendency to be taken in by a pretty face. Despite his boxing skills and the ability to hold his own in a scrap, he’s no young James Bond. He ends up in tight spots and only gets out of them by the skin of his teeth. His escapes never go beyond the bounds of possibility, and are all the more chilling for that. The odds are definitely stacked against him in this one, though.

This is chilling stuff for a generation who can take the hard reality of life – and death. No one waves a magic wand and it doesn’t all end up happily ever after. But fortunately, the ending is very much set up for the next book, and I definitely want to find out what happens next to Finn Maguire.