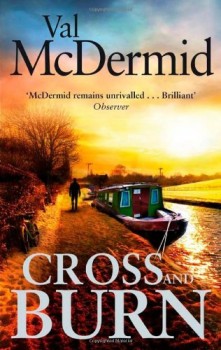 Carol Jordan has cut Tony Hill out of her life. Or at least she thinks she has. Women who bear a resemblance to Carol are turning up dead, and there’s a very unlikely suspect in the frame.

The arrival of another book in Val McDermid’s Tony Hill and Carol Jordan series always heralds a red letter day, meaning I can set aside several hours to meet old friends and acquaintances, and provided I can keep the image of Robson Green out of my head, I’m a very happy bunny.

Clever plotting is always the hallmark of McDermid’s books, and Cross and Burn is no exception to that. On this occasion, though, Carol Jordan is the outsider looking in. She’s handed in her resignation and is working out her guilt at the vicious murder of her brother and his partner by practically gutting the barn conversion that was their home, stripping out the bad memories and hoping to replace them with something else. She’s had no contact with Tony Hill or any of her old colleagues and has very effectively gone to ground.

When a woman is found brutally murdered, kicked to death after what has clearly been a series of horrific sexual attacks, newly-promoted DS Paula McIntyre is struck by her resemblance to Jordan, at least as far as hair colour, body type and clothing is concerned. It’s not possible to use the dead woman’s face for comparison as there’s virtually nothing left of that for comparison.

When a second woman goes missing, who seems to fit the same mould, McIntyre and her partner, hospital doctor Elinor Blessing, end up looking after her teenage son, who reported her missing, as his mother was a friend of theirs. Torin is convinced his mother wouldn’t just have abandoned him and Paula McIntyre agrees. She’s got a very bad feeling about Bev McAndrew’s chances of being found alive, and both her and Elinor are determined to do what they can for Torin, even though McIntyre’s new DCI, the ambitious and extremely single-minded Alex Fielding, is equally determined that she doesn’t want McIntyre wasting time on a missing person’s enquiry.

Matters take a very strange turn when the evidence points in a wholly unexpected direction, one that’s enough to convince Jordan to rejoin the rest of the world, albeit unwillingly.

It’s always hard to assess how someone coming new to a long-running series would feel about a book like this. But I think the characters are well-drawn enough and just enough of the background is seeded for this to work as a standalone, although knowledge of the history between ex-copper Jordan, and criminal profiler, psychologist Tony Hill, will certainly deepen the sense of loss and estrangement felt by Hill, as Jordan remains determined to keep him out of her life.

Some unlikely allies come along, particularly criminal defence lawyer Bronwen Scott, a woman who’d make a great white shark think twice before taking her on. Her exchanges with all concerned are an absolute delight.

Cross and Burn moves along at a very respectable pace, with the investigation never feeling in any way contrived. There seems to be a bit of a vogue at the moment for the identity of the villain of the piece to be made clear early on, so it was refreshing to find no premature reveal here, just an excellent build up to an ending that doesn’t in any way disappoint. This is Val McDermid on top form.