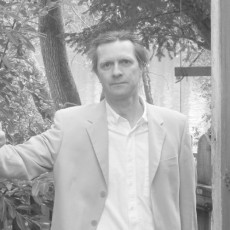 He was born in Surrey, but spent his formative years in rural Shropshire where he learned to drive tractors and worm sheep. He has been a reluctant farmer, an average drummer, a failed PhD student and a pretty good programmer.

In 2011, with a dearth of programming projects available, he wrote and self-published his debut novel, Touch. The ebook went on to become a number one thriller on Amazon and was picked up by HarperCollins imprint, Avon.

He lives with his wife, two children and a rather large dog beside a muddy creek in deepest South Devon where there hasn't been a murder in years.

I’m in my office (shed) and I can see:
Mundane writing equipment including computer, two screens
A cup of tea.
The muddy estuary at the bottom of the garden.
A Little Egret wading in the shallows as the tide ebbs.
A sailing dinghy.
Thunder, our Estrella Mountain dog (very large, very loud and very cuddly).
My kids’ trampoline (sans children).
A lawn in desperate need of a mow.
A thatched roof in desperate need of repair.

Three slices of white bread. Toast one slice and sandwich between the other two untoasted, buttered, slices. Tuna mayo in top section, lettuce and cucumber in the bottom section (or your choice of fillings). Knock-out mixture of textures and flavours. Try it!

Crooked Letter, Crooked Letter by Tom Franklin. A brilliant rural noir set in Mississippi. Winner of the CWA Gold Dagger.
Finisterre by Graham Hurley. Slow-burning Second World War thriller. As good as anything Hurley has written.
The Abyss Beyond Dreams by Peter F Hamilton. Space opera from one of the masters of the genre.

Buy shares in Microsoft and Apple.