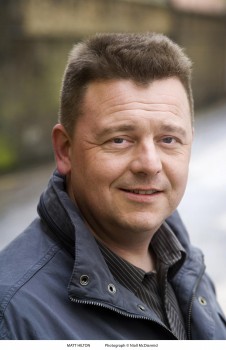 Matt Hilton was born the same year that England won the World Cup, which is a very long time ago. Not that he's interested in soccer; his sporting interests are in boxing, MMA and martial arts – he’s a 4th Dan in the combat art of Kempo JuJitsu.

He was born in Scotland, but followed his family south to England and grew up in Carlisle, Cumbria and has stayed in the county since. From a very young age, Matt scribbled down short stories, and even attempted his first novel at age 11.  For more than 20 years he submitted his books to publishers without success, until in 2008 he finally managed to secure an agent and a five-book deal for his Joe Hunter series.

Matt worked at various mundane jobs, before going into the private security industry for 18 years, followed by four as a cop. He quit his career as a police officer with Cumbria Constabulary to pursue his love of writing. Matt also writes horror and humorous crime short stories under the pen name of Vallon Jackson.

I’m sitting in my living room at home in north Cumbria, but am fortunate (if I stretch my neck) to be able to see:
1. Skiddaw Pike in the Lake District
2. Criffel Pike in Dumfries and Galloway
3. A terraced front lawn
4. Fruit and fir trees
5. Rain
6. My dogs, Spooky – a white German shepherd/Samoyed that looks like a dire wolf – and Akisha, a hairy Akita Inu who’s as soft-natured as a teddy bear and looks like one.
7. A huge mug of coffee
8. An unused Vype electronic cigarette
9. A framed cover of my first published book.

I don’t drink alcohol very often, but I’d make the exception if I were in a bunch consisting of Robert E Howard, Bruce Lee, Bob Hope, Laurel and Hardy, Conan the Cimmerian, Albert Einstein and Musashi Miyamoto (Miyamoto Musashi).

1. Onomatopoeia
2. Susurration
3. Mass spectrometer gas chromatograph (I know it consists of four words, but when you say it fast it all blends into one)
4. Basically
5. Just

1. Black Ops by Stephen Leather
2. Born in A Burial Gown by Mike Craven
3. Snatched From Home by Graham Smith

1. Other drivers
2. The fact I only get to rant about two things!

Stop pussyfooting around and go for it.