It’s always a bonus for your editors when a book pops up set in their home city. Linda, who has been banned from Lancashire for various unspecified misdemeanours, does grabby paws if she sees a book set in her adopted city of Bristol. If you ever have a spare 15 minutes, Sharon will regale you with the time she was driven to check up with West Midlands Travel’s press office, as she was so aggravated by the inaccuracies in a story set in Birmingham – particularly the point around which the murder revolved. All you need to know is that there haven’t been slam-door trains on the cross-city line since dinosaurs patrolled Selly Oak!

So Linda dived into Deadly Dance, the latest from Hilary Bonner, where a killer has preyed on a 14-year-old girl in Bristol. At first it seems an easy case for DI David Vogel and his team, but then doubts creep in. Linda says Bonner serves up an intriguing, multi-layered police procedural.

Staying with procedurals, she also liked When the Dead Come Calling by Helen Sedgwick, where the murder of a psychotherapist sends a northern village into shock and piles the pressure on its resident DI, Georgie Strachan. The book is a clever combination of psychological suspense and low-key police procedural, although Linda would like some stronger geographical clues next time around. The latest outing for William Shaw’s DS Alexandra Cupidi sees her learn that the Kentish Fens offer more than quiet and seclusion after the tumultuous Met. Kati Barr-Taylor says that Salt Lane rattles along at a strong pace, thanks to a good balance of action, introspection and dialogue.

Chris Roberts has been prowling the corridors of law on both sides of the Atlantic, starting on home turf with Once a Liar by AF Brady where successful New York lawyer Peter Caine has built a career defending some very nasty people. But it all starts to go wrong for him when he finds himself as a suspect in the murder of his ex-mistress. Chris says the whole cast come across as preoccupied with wealth and status, even when they are supposedly public benefactors, which makes it hard to engage with them as people. Chris got on better with Guilty Not Guilty by Felix Francis. He enjoyed the lively courtroom tussles as a man stands trial for the murder of his sister and says the book entertains as well as being instructive.

We’ve got a lively crop of historicals to keep you entertained. Preservation by Jock Serong is set in 1797 with the shipwreck of a vessel on an island in what became known as Bass Strait. A small group have to make their way to Sydney, but the few who arrive have different tales to tell about the journey. Chris Roberts says the book is powerful and will appeal to those who enjoy history brought to life. Moving forward in time, Nick Rennison’s More Rivals of Sherlock Holmes features 15 of the other detectives – police officers, PIs and eccentric criminologists – who all had their day in the sun in popular magazines around the time. John Cleal describes this as a fascinating look at a vibrant and informative period in crime fiction history. John frequently gets on well with the British Library classics and Murder in the Mill-Race by ECR Lorac was no exception. He describes the investigation into the murder of the warden of a children’s home as a confident, well-written story with standout characters, a wealth of detail and some stunningly poetic descriptions. John always enjoys a touch of the macabre and A Shadow on the Lens by Sam Hurcom, doesn’t disappoint. Forensic photographer and investigator Thomas Bexley probes the horrifying murder of a teenage girl in an isolated South Wales village in 1904, and plunges into a world of claustrophobic suspicion, mass murder and the supernatural. It’s creepy, disturbing, eerie, dark and spine-chilling in every way that a Gothic thriller should be. Prepare to feel uneasy, but John predicts that you won’t want to put it down.

John, who can spot a historical inaccuracy at 20 paces, also enjoyed the return of Inspector Betty Church in MRC Kasasian’s The Room of the Dead, despite some World War II aircraft errors. Although Kasasian hovers frequently on the verge of slapstick, he always drags the reader back to the central business of murder, no matter how many false leads abound. Arnold Taylor didn’t get on quite as well with Gareth Rubin’s Liberation Square. Imagine that D-Day had gone the other way, with the Germans victorious, instead of the Allies. In the highly charged political climate that follows, a woman sets out to clear the name of her husband, who’s been arrested on a murder charge. Despite the set-up, Arnold felt that attempts to engender excitement fell rather flat.

We have two books this issue set in France. In Maigret and the Killer by Georges Simenon, a young man with a particular interest in recording the voices of strangers is stabbed and killed in the street during an early spring downpour. Chris Roberts says Maigret is absolutely on his game, judging the situation in a masterful manner and never looks like being wrong-footed. Our second trip across the Channel whisked Kati Barr-Taylor to an idyllic villa in the south of France, where a woman finds messages on her husband’s phone that portend a lurking danger. Kati thought the big reveal was a bit flat, but describes The Holiday by TM Logan as an excellent, easy and fun read. Also on the Euro beat, Ewa Sherman enjoyed a trip to Iceland in company with Lilja Sigurðardóttir. A woman’s prison sentence for financial crimes is coming to an end, while her former nemesis gets drawn into helping her to pull another international money fraud. Ewa says Cage seamlessly weaves together drug-smuggling, financial crime and politics.

Kati Barr-Taylor had mixed luck with the domestic noir ration this week. In Her Eyes has a woman’s life hanging in the balance for a second time, but this time it’s not cancer killing her, it’s a bullet. Kati says she was looking for escapism and found it in bulk in Sarah Alderson’s knotty domestic suspense story. And she says that The Promise by Teresa Driscoll, where secrets are set to be unburied after more than 30 years, has hints of sharp writing, but ends up as a bland domestic noir rather than the promised psychological thriller.

Viv Beeby says Susan Hill’s Chief Superintendent Simon Serrailler’s long-running series could be seen as the Aga-sagas of the crime world, but The Benefit of Hindsight, in which Lafferton police are just about coping with a series of ruthless and meticulously planned robberies, is also well-written with the subplots neatly woven into the whole. Across the pond, Linda Wilson enjoyed the combination of old characters and new in The Night Fire by Michael Connelly. When a cold case lands in Harry Bosch’s lap, he needs the help of night shift detective Renée Ballard again as the two look into an unsolved murder from 20 years ago. Linda says it’s a clever, complex police thriller. If you’re already a Harry Bosch fan, you certainly won’t be disappointed and if you’re not, she’d recommend diving straight in. Don’t mention the city of Bath to John Cleal if you want a quiet life – but he’s always had a soft spot for Peter Lovesey’s Supt Peter Diamond series. He was disappointed with Killing With Confetti which he says seemed over-padded and with a rather incongruous dark plot. Whisper it quietly, but the series may need pensioning off, says John.

Our YA queen Linda Wilson enjoyed jumping into Faye Bird’s thriller My Secret Lies With You where Cait is determined not to enjoy the holiday her mother has arranged – until a meeting with boy-next-door Marko changes things, and she starts to think North Wales might not be quite as dull as she expected. Linda guarantees you’ll be turning the pages fast in the hope of getting to the bottom of this complex emotional story of love and loss.

Please welcome author Steph Cha to the Countdown seat this week – and we like her immediately, as she has bassets! And we’ll be gate-crashing her drinks outing, as that’s a very eclectic bunch of people there … 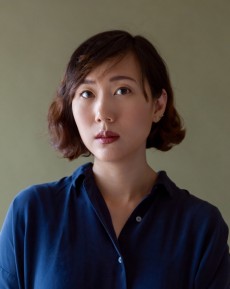 Steph Cha is the author of Your House Will Pay and the Juniper Song crime trilogy. She studied English and East Asian Studies at Stanford University, then at Yale Law School, where she wrote her first book.

She is the Noir Editor at the Los Angeles Review of Books, a contributing book reviewer for the Los Angeles Times and a regular panelist at crime and literary festivals.

Steph was born and raised in the San Fernando Valley, and now lives in Los Angeles with her husband and two basset hounds. She’s a lover of games and puzzles, and was once internationally ranked in Minesweeper and has written over 3,600 Yelp reviews.

Inspiration, procrastination, drive. The struggle and triumph of taming novels.

Instant ramen, with an egg cracked in if I’ve got it. Eaten with kimchi, which I always have on hand.