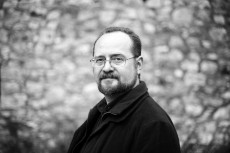 Stuart MacBride was born in Dumbarton – no one knows why, not even his mother – and moved up to Aberdeen at the age of two. There followed a less than stellar academic career, starting out in Marchburn Primary School, where his evil parents forced him to join the cub scouts (specialising in tying unnecessary knots in things and wearing shorts). Thence to Middlefield Academy for some combat recorder practice.

Having outstayed their welcome in Heathryfold they moved to Westhill – to a housing development built over the remains of a pig farm. Sounds a bit suspect, but that’s what the official story was when all the householders found teeth and bones coming to the surface of their neatly tended vegetable plots. Eventually Stuart escaped from Westhill Academy with a CSE in woodwork, a deep suspicion of authority and itchy shins.

Here followed an aborted attempt to study architecture at Herriot Watt in Edinburgh, which proved to be every bit as exciting and interesting as watching a badger decompose. Stuart gave up the academic life and went a-working offshore instead. That involved a lot of swearing and drinking endless cups of tea.

After his stint offshore he had a bash at being a graphic designer, a professional actor, an undertaker, a marketing company’s studio manager, a web designer, programmer, technical lead … Then last, but by all means least, finally circling the career drain by becoming a project manager for a huge IT conglomerate.
.
While Stuart was doing all that IT stuff, he wrote a wee book about an Aberdonian detective sergeant and his dysfunctional colleagues: Cold Granite. HarperCollins bought it, and overnight he went from a grumpy project manager caterpillar to a writing butterfly. As long as you can picture a 6ft tall, pasty-white, bearded butterfly with no wings, that spends all its time hanging about the house in its jammies.

Other highlights of Stuart’s career include being inducted into the ITV3 Crime Thriller Hall of Fame and winning Celebrity Mastermind. He has also been crowned World Stovies Champion and the dissecting room at the University of Dundee’s mortuary is named after him.

Stuart lives in the northeast of Scotland with his wife Fiona, cats Grendel, Gherkin, Onion, and Beetroot, some hens, horses and a vast collection of assorted weeds.

A Song for the Dying

Former Detective Inspector Ash Henderson is still in prison for the murder of his brother, a crime he didn’t commit, but a killer from his past has stuck again, and Ash’s particular brand of skills are needed on the outside. But can he stay out of the clutches of the vengeful Mrs Kerrigan?