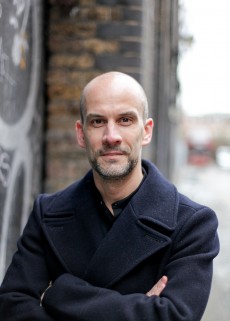 Simon Lelic was born in Brighton in 1976 and, after a decade or so living in London and trying to convince himself that the tube was fine, really, because it gave him a chance to read, he and his wife moved back to Brighton with their three young children. That Barnaby, Joseph and Anja’s grandparents happened to live close enough by to be able to offer their babysitting services was, of course, entirely coincidental.

As well as writing, Simon runs an import/export business. He says this, when people ask, with a wink but fools no one – he’s more Del Trotter than Howard Marks!

Simon studied history at the University of Exeter. After graduating he was qualified, he discovered . . . to do an MA. After that he figured he had better learn something useful, so took a post-graduate course in journalism – so much for learning something useful!

After working freelance and then in business-to-business publishing, Simon now writes novels. Not useful either, necessarily, but fun and, in its own way, important.

His hobbies (when he has time for them) include reading (for which he makes time, because he can just about get away with claiming this is also work), golf, tennis, snowboarding and karate. His weekends belong to his family (or so his wife tells him), as does his heart.

Lily is missing. Ollie and the rest of the Haven’s council vow to get her back, no matter what the cost.

Pupils are going missing from an elite boarding school. Ollie Turner knows it’s a job for the kids of the underground community, the Haven, and that’s even before he knows quite how personal the connection is.

When 13-year-old Ollie Turner’s guardian is murdered, he’s taken in by a group of kids living a separate life under the streets of London and has to fight to prevent chaos and destruction being brought to the city’s streets.