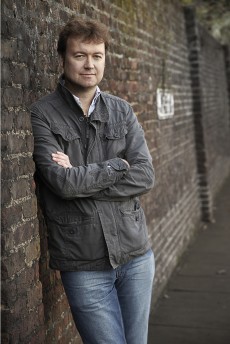 Simon Kernick has had a variety of jobs, including labourer in a road-building gang, fruit picker and a Christmas tree uprooter. After a fair bit of drifting and several years spent living and travelling in Canada, the USA and Australia, he did a degree in Humanities at Brighton Poly as it was then, and ended up working as a computer software salesman. He wrote two books in his spare time, and eventually had The Business of Dying published in 2002. The research for the books involves him talking both on and off the record (but usually off) with a number of contacts in the police and security services, including Special Branch, the Anti-Terrorist branch, and SOCA (the Serious and Organized Crime Agency).

Matt comes home from a night out with friends to find his girlfriend missing and a dead woman’s body in their bed. The nightmare gets worse when he’s told that Kate will die if he involves the police. To get Kate back, Matt has to do the unthinkable. He has to kill a stranger.

Disgraced copper Ray Mason didn’t ask to be broken out of prison. The people responsible want someone dead and they’ve decided that Mason is best placed to make that happen. The only problem is that the target is a candidate for the top job in British politics.

We Can See You

Brook Connor seems to have it all. But her life comes crashing down in ruins when her daughter is kidnapped. She can’t go to the police, as the kidnappers say they can see everything she does. The trouble is, Brook doesn’t even know if she can trust her own husband.

Dead Man's Gift and Other Stories

DI Ray Mason and cop-turned-PI Tina Boyd are on the trail of a group of powerful, sadistic killers, but the odds are stacked against them.

The discovery of the bodies of two murdered women, one of whom went missing in Thailand in 1990, opens two cold cases that soon become very hot to handle.

Jane Kinnear is in a police safe house after witnessing a brutal double murder while DI Ray Mason has to catch the killer and foil an imminent terrorist attack.

Matt Barron has lost his memory in a car accident but he’s not sure if the people who are meant to be helping him can really be trusted, and when his past does start to catch up with him, nothing is quite what it seems.

Reviewed on 07 February 2015 by Linda Wilson

A family canoeing trip leads to terror for teenager Jess Grainger when she ends up helping a mysterious woman escape from the men with guns who are clearly trying to kill her. Jess soon discovers that they’ll kill anyone who gets in their way.

Reviewed on 22 February 2014 by Linda Wilson