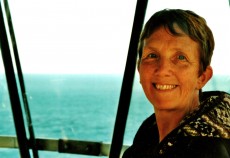 Ann Cleeves is the author behind ITV’s Vera and BBC One’s Shetland. She has written over 25 novels, and her books have now sold over 1 million copies worldwide. Ann worked as a probation officer, bird observatory cook and auxiliary coastguard before she started writing. She is a member of Murder Squad, working with other British northern writers to promote crime fiction. Her latest book, Thin Air, is published by Macmillan in hardback.

Dr Nigel Yeo wants to talk to DS Jen Rafferty at a convivial party. Hours later he is found dead, a shard of glass sticking from his neck. DI Matthew Venn and his West Country team investigate.

The body of a young woman is discovered in the grounds of the Stanhope estate. The combination of the remote and snow-covered landscape, a close-knit village community and ancient family secrets leads to a classic case of love, revenge and murder.

A man is found stabbed to death on the bleak North Devon coast. Detective Inspector Matthew Venn leads the hunt for the killer.

Reviewed on 28 September 2019 by Linda Wilson

Reviewed on 15 September 2018 by Fiona Spence

DI Vera Stanhope has been persuaded to give a talk to inmates at Warkworth Prison. At the end she is approached by a prisoner in a wheelchair whom she recognises. He says he has information that she would be interested in hearing. Reluctantly she agrees to listen to what he has to say.

Reviewed on 25 November 2017 by Arnold Taylor

Detective Inspector Jimmy Perez of the Shetland police is attending the funeral of an old friend when a sudden land slip smashes through a croft in its path.

Reviewed on 21 January 2017 by Arnold Taylor

Reviewed on 10 October 2015 by Arnold Taylor

Three old university friends, Caroline, Eleanor and Polly, leave London for the Shetland Isles where they are to celebrate Caroline’s recent marriage to a Shetlander. Almost immediately after the party, one of them disappears and her body is found in a loch.

An elderly, elegant, woman is found dead on a Metro train in the north east of England. It turns out that she lived in Mardle, the next stop on the line, and that, although reserved, she is well liked in her hometown.

A boat floating in a marina is found to contain the dead body of a young man, a former resident of Shetland.  The police investigative team consists of a woman whose first major case this is and a man still traumatised by the death of his wife.

Reviewed on 11 January 2014 by Arnold Taylor