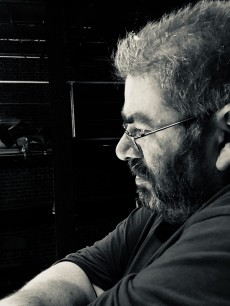 Ben Aaronovitch was born and raised in London and all his work has reflected his abiding fascination and love for what he modestly likes to refer to as the ‘capital of the world.’ He is the author of the Peter Grant/Rivers of London urban fantasy series, plus a spin-off series of graphic novels set in the same universe.

In his youth he wrote for Doctor Who (including the Remembrance of the Daleks episode), Casualty and the late, lamented space soap Jupiter Moon – a show so low budget that you were only allowed seven of the regular cast in any given episode!

He also wrote a series of tie-in novels for Virgin Books and Big Finish that turned out to be excellent practice for his fiendish plan to inflict his prose upon an unsuspecting world.

Ben still lives in London and is currently working on his next novel.

When rookie London copper Peter Grant talks to a material witness to a murder in Covent Garden, he’s not expecting to find himself interviewing a ghost, and he certainly doesn’t expect anyone to believe him, but then Peter’s career takes a sharp turn in an unexpected direction.

An operation to bust a gang of petty thieves turns into a hunt for a possible werewolf in the latest outing for the Met’s most specialised policing unit, the Folly.

Tales from the Folly

A collection of short stories and shorter snippets set in the expanded universe of the Folly, home to London’s smallest and most specialist branch of the Metropolitan police.

When a BMW turns into a watery grave for its owner, river goddess Beverley Brook tips off copper Peter Grant that there might be more to this than just an accident and sets him on a collision course with a murderous car.

What Abigail Did That Summer

While magician and copper Peter Grant is off chasing unicorns and missing children, his 13-year-old cousin Abigail has some missing kids of her own to investigate, with the help of a bunch of talking – and very organised – foxes.

The Fey and the Furious

Peter Grant is roped into the fast, dangerous world of illegal street racing, and thrust into a world he has absolutely no desire to visit again.

Reviewed on 19 December 2020 by Linda Wilson

In his first undercover role, Peter Grant infiltrates a London based tech company which is hiding a secret within its Douglas Adams-themed offices.

Reviewed on 11 April 2020 by Madeleine Marsh

Action at a Distance

The death of an old friend takes both Nightingale and Peter Grant on a trip down memory lane.

Reviewed on 22 February 2020 by Linda Wilson

Tobias Winter of the German magic police has to find the connection that links a death in a vineyard with the supernatural history of the Trier area.

The Faceless Man is back and it’s up to DC Peter Grant and his colleagues from the Folly to stop his latest murderous spree and stop him unleashing chaos on London.

Reviewed on 08 December 2018 by Linda Wilson

When things that normally go bump in the night start disturbing commuters on the tube, PC Peter Grant gets dispatched to sort out the problem.

Life was always going to get complicated for Peter Grant when Lady Ty's teenage daughter is involved with a drug overdose at a party, but matters quickly become more complicated with the involvement of a magical book and the Faceless Man.

Reviewed on 18 February 2017 by Anthea Hawdon

Peter Grant takes a trip to rural Herefordshire to assist in the search for two missing children.

Reviewed on 29 November 2014 by Linda Wilson

A murder, a suicide and a theft of a magical book lead PC Peter Grant to a strange estate in South London. Can he find out what the evil magician, the Faceless Man, is planning before it's too late?

Reviewed on 11 December 2013 by Anthea Hawdon