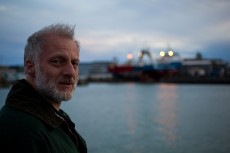 Quentin Bates dates back to the year of the Cuban Missile Crisis and was brought up in the south of England. In the year that Margaret Thatcher became Britain’s Prime Minister, he was offered the opportunity to spend a gap year working in Iceland and jumped at the chance of escape. The gap year turned into a gap decade, during which he worked as a netmaker, factory hand and trawlerman, started a family and generally went native.

Seagoing was followed by many years as a journalist for an obscure nautical trade magazine, a dream job for anyone who gets a kick out of visiting industrial estates and obscure harbours miles from anywhere. From there it was a series of sidestep into fiction.

The book that became Frozen Out (Frozen Assets in the US) grew out of a university writing course that enabled him to take an afternoon off work once a week. As well as writing the Gunnhildur series, Quentin also translates Icelandic crime fiction into English.

Officer Gunnhildur Gísladóttir’s new task is to protect an enigmatic guest of the Iceland’s controversial Minister of Justice. Ali Osman is either a saviour of war zones’ refugees, or a manipulative arms dealer.