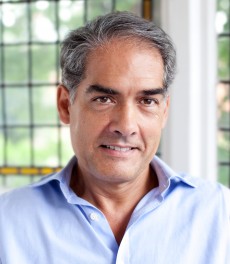 Philip Kerr was born in Edinburgh and read Law at university, where he developed a fascination for German history. Following university he worked as a copywriter at a number of advertising agencies, including Saatchi & Saatchi, during which time he wrote no advertising slogans of any note! He is the author of more than 20 books, including the Bernie Gunther novels, several standalone thrillers, the Scott Manson football series, and the young adult series Children of the Lamp under the pen name of PB Kerr. In 2009, he won the British Crime Writers' Association Ellis Peters Historical Fiction Award and Spain's RBA International Prize for Crime Writing for his Bernie Gunther series.

When three cases a lapsed Catholic FBI agent is working on collide – the explosive intentions of a domestic terrorist cell, and two cases of unexplained serial murder – religion seems to be behind them all.

After a year in office, Fidel Castro was sufficiently unpopular for elements of the US Government and the mob to arrange an assassination. However, these things don’t always go according to plan.

In autumn 1943 the tide of war has turned and Germany is putting out peace feelers. But the response of the allies will be settled in Tehran.

Reviewed on 19 September 2020 by Chris Roberts

In Weimar Republic Berlin, Sergeant Bernie Gunther transfers to the murder squad and is designated to investigate a string of murders of prostitutes.

Bernie Gunther starts a new career as an insurance investigator, but a trip to Greece to investigate a claim for a lost ship has a none-too-comfortable connection with wartime events.

Bernie Gunther takes flight from a Stasi apparatchik 1956, putting him in mind of his 1939 investigation into a murder at the Berchtesgaden.

The Other Side of Silence

Bernie Gunther is living a quiet life in the South of France in 1956 when an old enemy reappears, and he is asked to undertake a sensitive task for a distinguished local resident – the writer Somerset Maugham.

London City’s star striker collapses during a Champions League match in Greece – and manager Scott Manson finds himself investigating in a country that is starting to crumble.

The Lady From Zagreb

Bernie Gunther’s reputation as a detective gets him a place as a speaker at an international police conference, and a private job looking into a company run by some important names.

Scott Manson is coach at Premiership football team London City. But he finds himself investigating murder when the manager is found dead.

Reviewed on 29 November 2014 by Sharon Wheeler