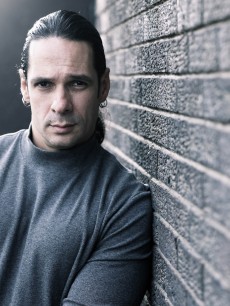 Chris Carter was born in Brasilia of Italian origin and spent his childhood and teenage years in Brazil. After graduating from high school, he moved to the US where he studied psychology at the University of Michigan with specialisation in criminal behaviour. During his university years he held a variety of odd jobs, ranging from flipping burgers to being part of an all-male exotic dancing group.

He worked as a criminal psychologist for several years. As a member of the Michigan State District Attorney's criminal psychology team, he interviewed and studied many criminals, including serial and multiple homicide offenders with life imprisonment convictions.

Chris then moved to Los Angeles, where he swapped the suits and briefcases for ripped jeans, bandanas and an electric guitar. After a spell playing for several well-known glam rock bands, he decided to try his luck in London. He toured the world several times as a professional musician.

A few years ago he gave it all up to become a full-time writer.

Lucien Folter, possibly the most prolific known serial killer in the USA, has escaped from prison, driven by the tantalising prospect of revenge against the man who put him there – Robert Hunter of the LAPD’s Ultra-Violent Crimes Unit.

Reviewed on 09 November 2019 by Linda Wilson

Gallery of the Dead

The man caught by accident in her selfie is last thing Linda Parker sees. The first thing Detective Hunter sees is the man’s horrific mutilation of her body.

The first question is a breeze and Tanya thinks the sick game is nearly over. But the second one she will never get right, and her punishment is to watch her best friend die.

Seven days after Nicole Wilson goes missing, her body is found in a field outside LA International Airport. She has been tortured and her body posed. A posed corpse means a ritual, which gives Detective Robert Hunter limited time until the killer does it again.

Reviewed on 26 September 2015 by Madeleine Marsh