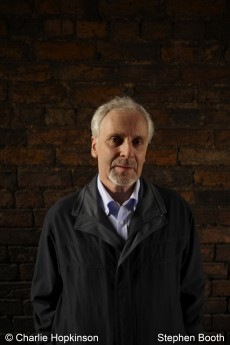 Stephen Booth was born in the mill town of Burnley and began his career in journalism by editing his school magazine, and wrote his first novel at the age of 12. Stephen trained as a teacher, but escaped from the profession after a terrifying spell as a trainee teacher in a big city comprehensive school.

He then worked as a newspaper and magazine journalist for over 25 years on local papers in Yorkshire, Nottinghamshire and Derbyshire, as well as working night shifts as a sub-editor on the Daily Express and The Guardian.

In 2000, Stephen's first published novel, Black Dog, marked the arrival of two young Derbyshire police detectives, DC Ben Cooper and DS Diane Fry. The 16th in the series, Secrets of Death, will be published in June 2016. All the books are set in the atmospheric Peak District.

While living on a smallholding in Yorkshire, Stephen began breeding pedigree dairy goats as a hobby (and as an extreme contrast to working in busy news rooms). Probably his most unusual role was as a director of an artificial insemination company!

Stephen left journalism in 2001 to write novels full time. He and his wife Lesley live in a village in rural Nottinghamshire.

When Chris Buckley is approached by an old man who wants his help untangling an old family rift, he’s not keen, and it shows. But when the man is killed in a hit and run accident, things take a more sinister turn.

Reviewed on 21 December 2019 by Linda Wilson

When a woman falls to her death in the fog on the bleak moorland of Kinder Scout, DI Ben Cooper is faced with the age-old question – did she fall or was she pushed?

Dead in the Dark

Ten years ago, Reece Bower’s wife went missing and he was in the frame for murder. Now he’s the one the police are looking for and it’s his new wife who wants him found.

Reviewed on 17 February 2018 by Linda Wilson

The Peak District is home to tourists of all types, but a rash of suicides is not what it wants to play host to.

DI Ben Cooper investigates the murder of a lorry driver whose truck gets stuck under a low bridge near an isolated Derbyshire hamlet.

The Peak District is drenched in rain and a naked body is found in a drainage ditch. DS Ben Cooper is still off work after the arson attach that killed his fiancée and DS Diane Cooper has her work cut out to keep his private life out of her investigation.