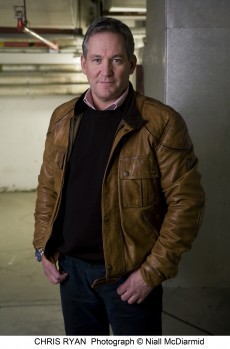 Chris Ryan is a former SAS corporal and the only man to escape death or capture during the Bravo Two Zero operation in the 1991 Gulf War. He turned to writing thrillers to tell the stories the Official Secrets Act stops him putting in his non-fiction. His novels have gone on to inspire the Sky One series Strike Back.

Born near Newcastle in 1961, Chris joined the SAS in 1984. During his ten years there he was involved in overt and covert operations and was also sniper team commander of the anti-terrorist team. During the Gulf War, Chris was the only member of an eight-man unit to escape from Iraq, where three colleagues were killed and four captured. It was the longest escape and evasion in the history of the SAS. For this he was awarded the Military Medal.

He wrote about his experiences in The One That Got Away, which was adapted for screen, and since then has written three other works of non-fiction, over 20 bestselling novels and a series of children’s books. His work in security takes him around the world.

Despite an ambush that leaves Danny Black the only survivor of an SAS unit, it’s not long before he’s deployed again, this time to assist in the assassination of the man ultimately responsible for the attack that left so many of his teammates dead.

Reviewed on 21 November 2020 by Linda Wilson

The History of the SAS

The history of the SAS, told from the inside.

Former SAS operatives John Porter and John Bald are recruited to a deniable op to rescue a British academic accused of spying in Venezuela. It’s not a job they’re keen on, but neither are in any position to refuse.

Someone is killing former SAS soldiers and the powers that be decide it’s down to Danny Black to deal with the person responsible for their deaths. The only snag is that he’s told that on this op, he’s on his own.

Reviewed on 07 September 2019 by Linda Wilson

The kidnap of a former Russian intelligence officer from a safe house sparks off a chain of events that sees former SAS operatives Bald and Porter called out of retirement again.

Danny Black has been sent to Afghanistan on a mission to hunt and kill the Taliban, but soon finds that he’s the one being hunted – for a war crime he didn’t commit.

Reviewed on 11 November 2017 by Linda Wilson

SAS man John Porter is sent into war-torn Sierra Leone to find and bring back Ronald Soames, the Regiment’s former commanding officer, the man Porter believes was responsible for trashing his career.

Teenage agent Zach Darke has to go up against an old adversary to save the life of two friends.

Reviewed on 26 November 2016 by Linda Wilson

After a devastating attack on a group of soldiers undergoing selection for the SAS, John Porter is given the job of tracking down the killers.

Danny Black is in command of a small team sent to carry out a hostage rescue in Nigeria. What awaits them there is far more dangerous than anything they could have expected.

While the country reels in shock from a series of suicide bombings, SAS trooper Danny Black is seconded to a covert assassination squad put together to neutralise the treat.

Reviewed on 27 December 2014 by Linda Wilson

SAS trooper Danny Black leads a small team of fellow soldiers riding shotgun for an MI6 agent who is attempting to make contact with one of the rebel factions in war-torn Syria.