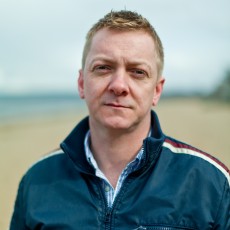 Doug Johnstone is a writer, musician and journalist based in Edinburgh. He has a degree in physics, a PhD in nuclear physics and a diploma in journalism, and worked for four years designing radars.

He is currently writer in residence with William Purves Funeral Directors. He is also a Royal Literary Fund Consultant Fellow, and was RLF Fellow at Queen Margaret University in Edinburgh 2014-2016. Doug was also writer in residence at the University of Strathclyde 2010-2012 and before that worked as a lecturer in creative writing there.  He’s had short stories appear in various publications and anthologies, and since 1999 he has worked as a freelance arts journalist, primarily covering music and literature.

Doug is one of the co-founders of the Scotland Writers Football Club, for whom he also puts in a shift in midfield. He is also a singer, musician and songwriter in several bands, including Northern Alliance, who have released four albums. Doug has also released two solo EPs, Keep it Afloat and I Did It Deliberately.

He grew up in Arbroath and lives in Portobello, Edinburgh with his wife and two children.

Journalism student Martha Fluke’s first day as a newspaper intern begins with a bang when a man shoots himself in the head while he’s on the phone to her.

Reviewed on 09 August 2014 by Sharon Wheeler