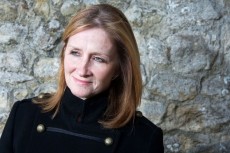 Sharon (SJ) Bolton grew up in a cotton-mill town in Lancashire and had an eclectic early career in marketing and PR. She gave it all up to go freelance, become a mother and a writer. Her first novel, Sacrifice, was voted Best New Read by Amazon.uk, whilst her second, Awakening, won the 2010 Mary Higgins Clark award. In 2014, Lost, (UK title, Like This, For Ever) was named RT Magazine’s Best Contemporary Thriller in the US, and in France, Now You See Me won the Plume de Bronze. That same year, Sharon was awarded the CWA Dagger in the Library, for her entire body of work. Sharon lives with her family of four, one of whom is a food-stealing, rabbit-chasing lurcher, in the Chiltern Hills, not far from Oxford.

South Georgia is the dream posting for glacier expert Felicity Lloyd, but dreams have a nasty habit of coming at a price.

Florence Lovelady returns to the town that launched her police carer, but soon starts to fear that her first murder case might not have been as cut and dried as everyone had thought.

The lone survivor of a hot air balloon crash has to go on the run to stay ahead of the ruthless killer responsible for the disaster.

Hamish Wolfe is in prison for the murder of three women. Lawyer and true crime writer Maggie Rose has succeeded in having convictions quashed in the past, but she has no intention of taking Wolfe on as a client, despite entreaties from his fan club.

Reviewed on 04 February 2017 by Linda Wilson

A child goes missing on the remote Falklands Islands. This is not the first time it’s happened and the last two children to disappear have never been found.

Reviewed on 12 September 2015 by Linda Wilson

A Dark and Twisted Tide

Lacey Flint has had enough of being a detective. A transfer to the Marine Unit suits her very nicely, but trouble seems to follow Lacey around no matter where she goes, and when bodies start to turn up in her beloved river, she can’t just sit on the sidelines.