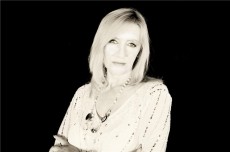 Mandasue Heller was born in Warrington, and spent many of her childhood years performing in am-dram productions. This love of the stage carried through to adulthood, and at 18 she began to tour working men’s clubs with her country & western band, Missouri Sunshine. She regularly appeared in such shows as Coronation Street, Brookside, Albion Market, Watching, and Boys From The Blackstuff.

After moving to Manchester in the early 1980s, she immersed herself in the underground music scene, fronting an original rock band, and session-singing for various blues, soul, and jazz bands. Forced by illness to temporarily quit singing in the 1990s, she turned her hand to writing, using the notorious Hulme Crescents, where she had spent her first ten years in Manchester, as the backdrop.

Her first written piece concerned a real-life incident, when a man had broken into her house in the early hours and attacked her as she lay sleeping with her ten-week-old son in her arms. The finished piece was too personal for anybody else to read, but she had enjoyed the process of writing, so decided to try her hand at fiction instead - and her first book, The Front, was snapped up by Hodder & Stoughton.

Mother to three grown children, and grandmother of three, Mandasue still lives in Manchester, and spends her time between books and family commitments locked away in the studio, writing and recording music albums with her producer/musician partner, Wingrove Ward.

Life couldn’t get much worse for Leanne Riley – she’s out of work and barely surviving life in a grotty bed-sit. Jake could be her escape route or her road to hell.

When 15-year-old Skye ends up in care, the children’s home is more like a young offenders’ institution and she has no one to turn to apart from a friend she met online. But it’s not her friend who comes to pick her up – it’s someone else entirely.

Her mother has run off to Spain with a bloke, leaving 15-year-old Chantelle to look after her younger brother and keep the debt collectors at bay. But her brother is in with a gang and Chantelle is on over her head and sinking fast