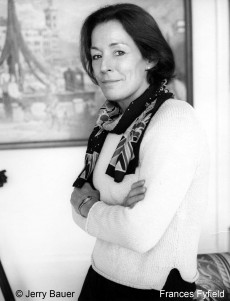 Frances Fyfield grew up in rural Derbyshire, but her adult life has been spent mostly in London, with long intervals in Norfolk and Deal. She studied English and went on to qualify as a solicitor, working for what is now the Crown Prosecution Service, thus learning a bit about murder at second hand.  Years later, writing became her real vocation, although the law and its ramifications still haunt her and inform many of her novels.

She is a novelist, short story writer for magazines and radio, sometime Radio 4 contributor, (Front Row, Quote Unquote, Night Waves,) and presenter of Tales from the Stave.  When she’s not working (which is as often as possible), Frances can be found in the nearest junk/charity shop or auction, looking for the kind of paintings which enhance her life.

Diana Porteous, young widow, art collector and semi-reformed thief gets involved in the shadier side of the fine art world.